Another coding style that Vue provides is called the Composition API where Vue instances are organized by the application’s features. For example, if we were building a e-commerce shopping cart we could organize our instances around features like add to cart, remove from cart, update quantity, etc.

The Options API is the original way Vue worked, while the Composition API is a newer addition that was added in Vue v3. The Composition API excels when working with very robust and complex interfaces as it can provide a more intuitive way to organize your components and reuse code. That being said, the Options API is a perfectly common and valid way to work with Vue and is still appropriate for many projects.

In the Vue docs, you can toggle between the Options and Composition API:

Preface aside, the best way to understand the difference between the Options and Composition API is to see an example, so let’s refactor FlashWord to use the Composition API. Because this will be taking our code base in a notably new direction, let’s set it up as a new project, just so we can keep the original Options API version for reference. To expedite things, we’ll start this new project as a duplicate of our existing flashword-vite application and build off of that.

Move into the new directory:

Remove the existing node_modules subdirectory so we can rebuild it:

Replace the JavaScript of /src/App.vue with this new Composition API code:

With our example set up, let’s dig in...

Coding with the Composition API

The key idea of the Composition API is that rather than building a component via Vue object properties, we define them as constants that utilize Vue methods.

To understand this, below is a side by side comparison of FlashWord’s App.vue, where the left side is the original written with the Options API and the right side is the updated Composition API code: 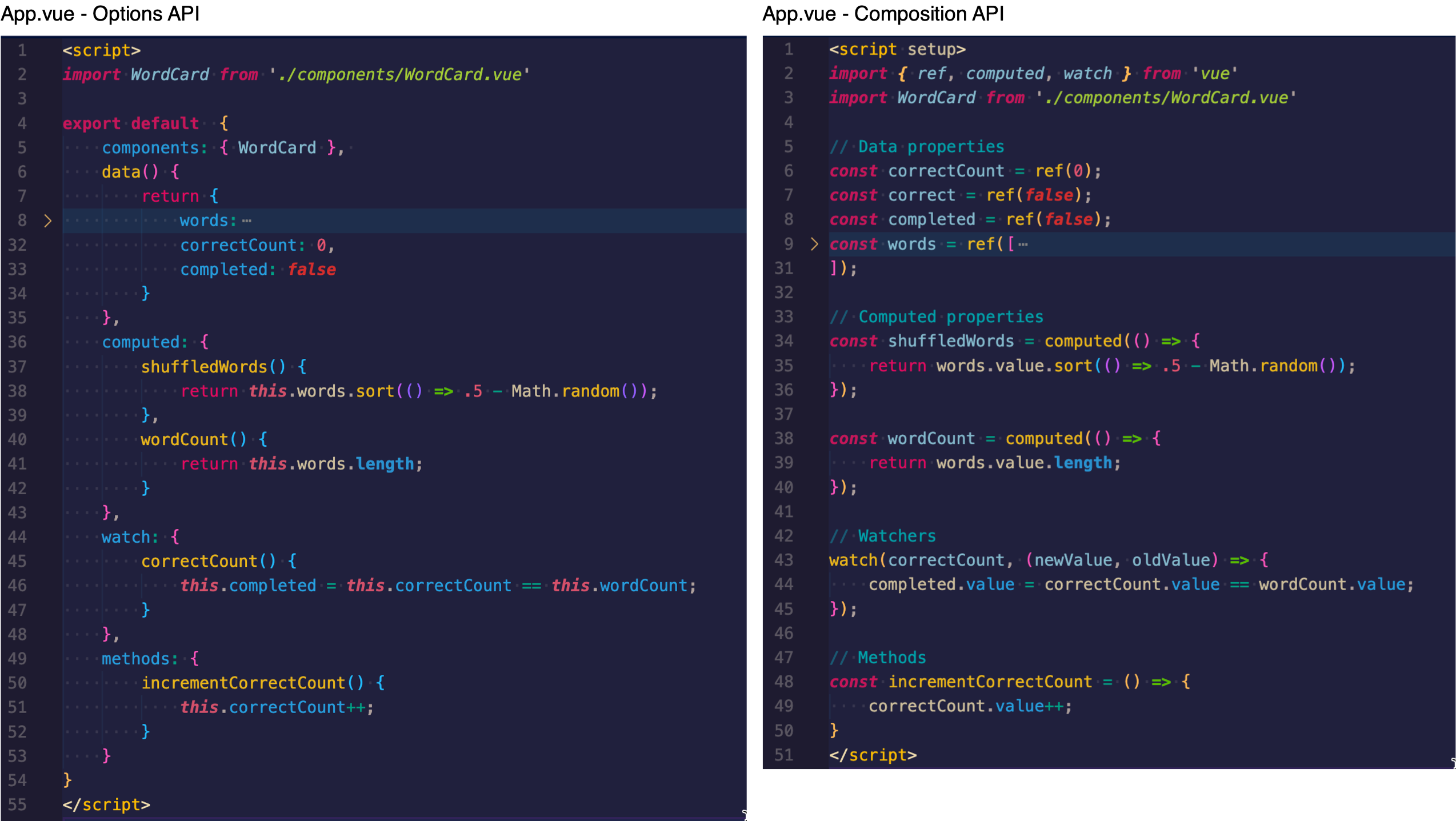 Observations about the above code:

What does this get us?

We’ve now learned that all of the options we have available via the Options API are made available in the Composition API via methods. This frees us up to reorganize our components by feature instead of by option.

For example, imagine we were building an e-commerce site and we had a component with two features, we’ll call them Search and Add to Cart

Each feature requires, hypothetically, a mixture of data, computed properties, and watchers.

In the Options API, our resulting component would be organized by options like this:

With the Composition API, our resulting component would be organized by features instead of options:

Composition functions: Another benefit of the Composition API is code reusability - because it gives us access to Vue utilities (reactive data, computed properties, etc.) outside the context of a component, we could extract shared logic into their own functions that can be imported and used within different components of our application.

Updating WordCard.vue to use the Composition API

Building on what we’ve learned so far, we can update WordCard.vue’s JavaScript to also use the Composition API.

This will require the introduction of two new methods: defineProps and defineEmits: