So far in this series we’ve been working with a bare bones setup - simple HTML/CSS/JavaScript files we’ve opened directly in our browser to run locally. When pulling in Vue, we imported it from a CDN removing any need to worry about directly managing external dependencies in our project.

This is a great way to start to get comfortable working with Vue, but now we want to expand on this to set up a more sophisticated development environment that will allow us to harness the full power of Vue.

Specifically, we want to start working with a build system that will provide the benefits outlined below.

Benefits of a build system

When it comes to working with build systems there are a lot of technologies you can choose from, but we’ll narrow down our tools to the following:

NPM is the default package manager for Node.js (the server-side implementation of JavaScript), but is used in the client-side world as well. We will use NPM to work with Vite and also manage any other outside dependencies our Vue projects might need.

You can see if you have NPM installed by running the command npm which (if installed) will yield something like the following:

If you receive a message along the lines of command not found, it means you don’t have NPM installed so you’ll want to head over https://nodejs.org/en/download to download an installer and get it set up.

To get NPM you’re actually installing Node.js which comes bundled with NPM.

In order to run the npm from command line, the path to the npm executable must be in your computer’s PATH variable which specifies which paths to look in when executing command line programs.

Windows users - The installer automatically added NPM executable path to your computer’s PATH settings, so you don’t have to do anything else. Close and restart your command line program and you should have access to the npm command.

Mac users - You will need to manually update your computer’s PATH variable to include the following paths:

Go here for instructions on how to edit your PATH variable on a Mac...

After editing your PATH, restart Terminal and you should now be able to execute the npm command.

With NPM installed, you can use it to create a new Vue project using Vite. Vite is a build tool that will set up your project with all of the benefits outlined in the introduction to this guide.

To get started, first move to a directory on your computer where you want to set up the project then run the following NPM command:

First, it will ask you to name your project. For this example, let’s call our project flashword-vite because we’ll model it after our existing FlashWord application:

Next, it will prompt you to choose a framework to set your project up with. Use the arrow keys to select the second option, vue, and hit enter.

When it prompts you to select a variant you have the options of regular vue or vue-ts which uses TypeScript. TypeScript is a variation of JavaScript that adds data typing which has a lot of advantages, but to keep things simple we’ll choose straight vue.

At this point your application setup should complete with the following details:

Per the instructions in the above output, we can first move into our new application:

Then run npm install which will prompt NPM to pull in our outside dependencies (right now that’s just Vue).

FYI
If you’ve never worked with NPM before, here are the basics of what you need to know:

Finally, we can initiate the build system in our application with the following command:

If you load the URL it provides you (in this example that’s http://localhost:3000) in the browser, you should see your brand new Vite-powered application.

Within your new project directory, find the file src/components/HelloWorld.vue and make a change to the content and observe how the change is automatically reflected in the browser - no refresh required! 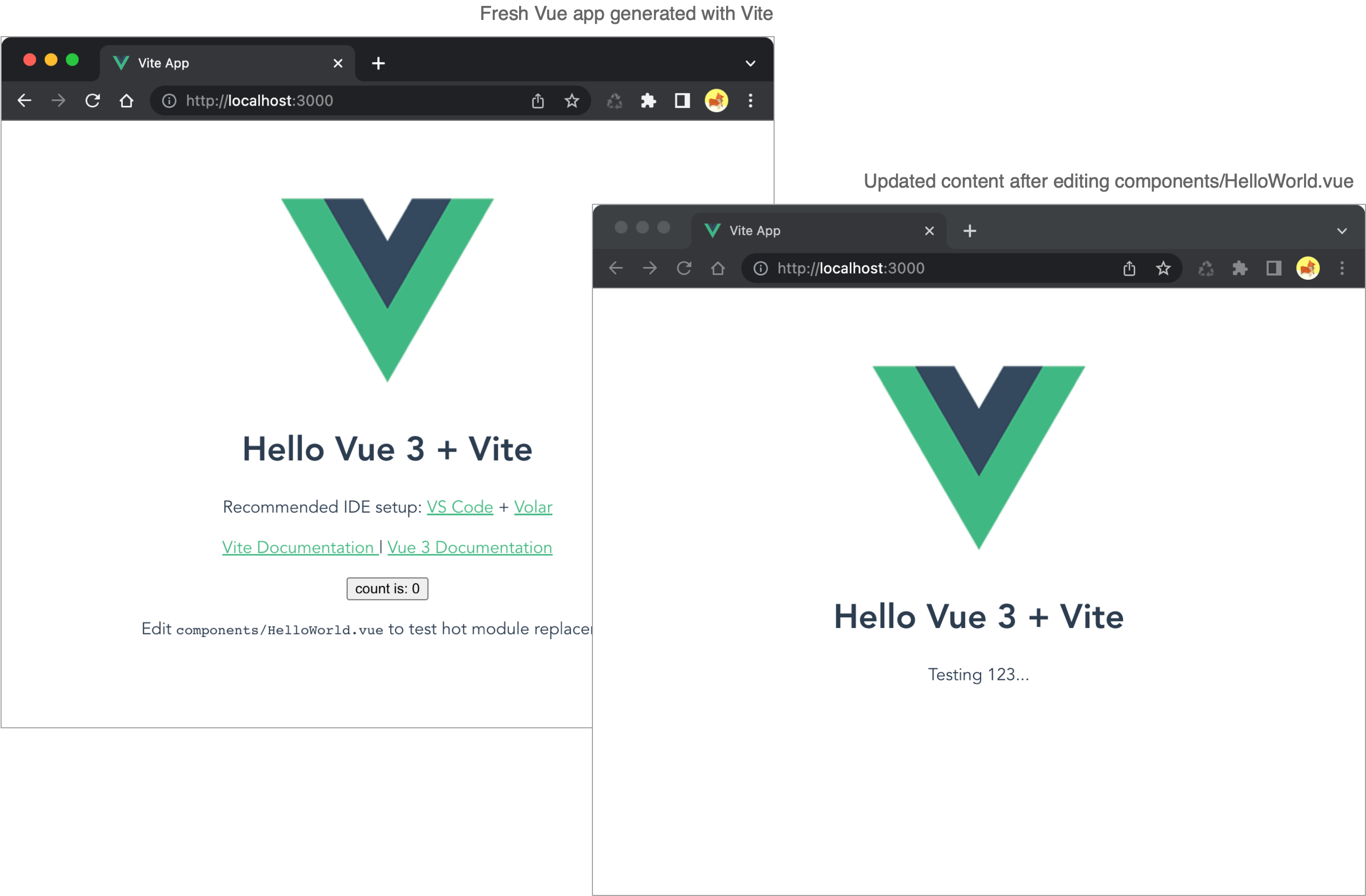 This is an example of ”hot reloading” aka Hot Module Replacement (HMR) which is one of the benefits we get with our new build system.

You can continue to access your site in the browser as long as your Vite dev server is still running in command line. To stop the server, use the keyboard shortcut ctrl + c. To restart the server, re-run the command npm run dev.

We have now successfully set up a new Vue project using Vite. In the next part of this series we’ll dig into this new project and understand how it’s set up and how to customize it.